skip to main | skip to sidebar

I need to clean up around here, don't I?

I doubt anyone even follows my blog, other than my DD, Yarn Demoiselle
so I wanted to say HI to her. ;)

I need to corral some of my knitting photos and get them posted. I'd taken a few months off of knitting but am back pounding out the socks!

Well not nothing, just no pictures of knitting! I've started knitting a plain jane SS sock at home for the girls. I'm on Abby's second pair. She had the nerve to come downstairs and ask if I'd knit her more socks. I looked right at her and said, 'I'm knitting you one right now, remember?' Apparently I do NOT knit fast enough.

This past Tuesday the hubby had ACL surgery on his left leg. (He had the right one replaced in 01) I took Tuesday off and hung out with him at the surgery center. ACL is out patient surgery, so we were there at 6:15 am and home by 11:30. It'd ridiculous how you are treated at those places. The staff is nice enough but you are on a ticking clock. Hubby is notoriously intolerant of narcotics, so he never comes out of anesthesia very well. Apparently he was to be out of that place by 11 and they pretty much dumped him in my car at 11:10, irritated with us that we weren't moving faster. Ugh. Don't get me started on Medical Care/Insurance. Just DON'T.

School is going well. Had my first test today in my New Testament class. Pretty sure I did ok on it. But the exciting news is my Biology Senior Research Project. Whoot! I'm so excited and hate to jinx it. So suffice it to say it looks like some bats are in my future. :)

I've decided that I am going to win the lottery so I can be a professional student. It's gotta work, right?

This semester I'm taking (Che 104) Intro to Forensics and Intro to the New Testament (Rel 103) plus a 300 level Bio class on how to prepare research and paper. I'm taking the Chem class for fun because nothing I needed to graduate worked out for my schedule and I had to have so many credits to get my Financial Aid. The Religion class and the Bio class are both needed for graduation. It's going to be very strange to not take a Bio course with lab, but you do what you gotta do!

Classes started today and I think I'm going to enjoy both the 100 courses. Tomorrow I see what the heck the Bio course is going to be like. I'm scared to find out..I see mucho work ahead of me with that one! It's only 2 credits, but that doesn't mean they still can't have you write a paper a week!

I have a few hours between my classes so I have a little knitting time per day. I am working on my pair of Slippery Socks, one is done and I'm 1/2 down the leg. I put them on the shelf over winter break because I really needed mindless knitting. I finished a pair of socks for Abby, one sock for Val with the rest of the yarn waiting to be skeined plus a hat for Val, a tam I designed on the fly. Quite fun! I blocked it too big so I need to soak it and reblock.

It's late today and I need to get into the habit of going to bed earlier. Hopefully tomorrow I can manage some pictures of various things!

Well my Christmas/Winter break is official over after today. I return to school Tuesday but the girls are home on Monday, so that doesn't count! I'm taking Intro to Forensics, which I am ridiculously excited about, Intro to the New Testament, which promises to be interesting, and a class on how to write Bio papers. Not so fun, but necessary to graduate, which I'm hoping to do in Spring 2011, with a BS in Bio. Still don't know what I want to be when I grow up..but who really does, right?

On the knitting front, I stalled out on the socks for Val when I realized that I wouldn't have enough yarn to knit the second one. What's a girl to do, but order more right? And well, who wants to pay shipping on just ONE little ole hank of yarn, when you could get more for the same s/h price. It appears two hanks of Shi bui fell into my cart. I love that yarn! I bought a variegated and a cream, with the idea of doing a stranded sock pattern.

I have yarn pulled aside to make Val a beret. It's just some random left over 220 from various projects. Should be quick and easy, just need to get off my duff and dig out the needles.

The dinette and kitchen work goes on. Hubby filled the holes in the wall that were bugging the crud out of me, just need to be sanded and painted. I worked on the floors and waxed them. Found out that my stupid windows are a stupid irregular size, so I can't find any inexpensive bamboo rolling shades that will fit. I'd have to custom order, which defeats the purpose really. The trim is still not painted and I'm really trying to boost myself in that direction, but failing miserably!

Not an incredibly exciting post since there aren't any pictures. I need to have Abby model her finished pair of socks and maybe have Val model the one completed one!

On one of the blogs I follow (boogaj.com) she had decided to tackle her house this year, one room per month. There are a few other bloggers who are joining her. (Room a Month) I would love to actively participate, but know that I really can't commit to the project while I'm in school. I do plan on following along with her and other participants while doing my own thing in Chez le K's.

Time and money are the issues, (we'll just ignore the fact that I don't HAVE 12 rooms) instead I'll clean one room intensely per month, and tackle projects that are incomplete in that room. Unfortunately in my house that means paint trim. I swear there is a special room in hell for me with endless trim to be painted and painted and painted....

This month is the kitchen/dinette area. Here are pictures of areas. I painted it this past August and love the colors. Before the entire area was a cold baby blue. *shudder* Just horrible during cold dreary Wisconsin winters! The dinette color is best shown in the last photo of it (orange), that also has the best representation of the red accent wall. The kitchen is a color called Bagel and it's not as yellowy as the first picture, so even though the second is dark, it's the closest to the actual color. Whew. I'll have to look at the budget to see what can realistically be purchased. Poor poor little budget has been bludgeoned these last 2 months, between Christmas and Val's January birthday!

On the knitting front, I finished the socks for Ab's and need to snap some pictures of them. Now I am getting ready to cast on a pair for Val.

Ok, the stash is out of control. I'm trying to wrap my mind around some realistic parameters to rein it back into .. a state that causes me to blush less.

Here's to hoping I can keep to that! I'm one of those weirdos who feels guilty when it gets too large. It just seems to loom over my head.

Wow, I was strolling through my old posts, looking for a colorway of yarn I had used, and realized just how much cool stuff is in my blog. Granted no one else really thinks it's 'cool', but it is such an amazing journal for my knitting.

So what better day to put up a new post than the last day of the year! :)

Currently I have a pair of Slippery Socks from Knitty on the needles in BMFA lightweight Grimm's Fairy Tale. One is finished and I'm going to cast on the second whenIt's a fun pattern, and I've finally learned to cable without a needle. It's relatively easy to do on the socks since they are really only 1x1 cables. Not sure how it would work on say.. 3x3 in a sweater, but it's a skill I'm glad to have. I'm trying to finish them up before heading back to school on Jan 19th. My next pair will be easier. I might even do another pair of monkeys. They are so easy and so wonderful!

Another thing that 'reminded' me of my blog was this: 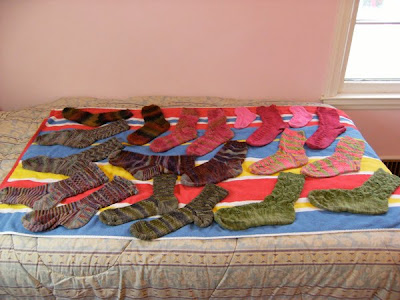 Ah, clean hand knit socks! I wanted to share this with someone so I thought of you, dear blog! Not that I remotely imagine anyone reads you anymore, but there you are for posterity's sake!

KnittyLynn
Me. SAHM with 2 young daughters, a mini-van I love and a house in the 'Burbs. I've been knitting in earnest since early 05. Life may be predictable, but it's at least enjoyable! kylandra at gmail dot com

Sticks & String
A podcast by an Australian bloke who knits.

This is a Flickr badge showing photos in a set called 2006 Finished Objects. Make your own badge here.